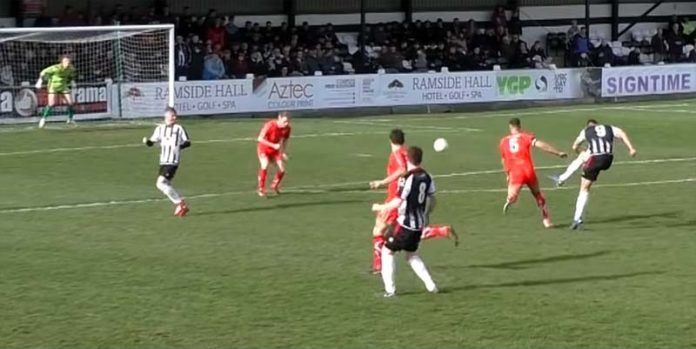 A second half penalty from Jordan Sinnott cancelled out Glen Taylor’s 28th goal of the season as Moors’ winless run stretched to five games against mid-table Alfreton on Saturday (23rd March).

The dent in form all but mathematically rules the Moors out of title contention just when a spell of positive results could have left the club in the mix for the automatic promotion slot.

A dominant spell of pressure from the visitors paid off when Stephen Brogan brought down Thomas Platt with fifteen minutes to go, allowing Sinnott to earn the in-form Alfreton a worthy point.

Taylor’s effort from 25 yards in the first half had given Spennymoor a deserved advantage, but they were unable to build on that promising spell.

Jason Ainsley brought in Jack Diamond and Lewis Hawkins after the pair signed on loan on Friday, and also opted to replace Callum Williams with Jake Hibbs at right-back.

Shane Henry, who started on the bench against Bradford Park Avenue, came in for the injured Mark Anderson, while Rob Ramshaw missed out through suspension.

The game’s first opening fell to the visitors and almost saw one of the goals of the season scored by the lively Sinnott, as he fired a free-kick against the bar from 30 yards, before Matt Gould stopped Richard Penikett’s follow up.

However, it was Moors who would soon be ahead as Taylor showed his class and quality yet again this season.

The league’s top scorer struck a sweet shot from distance which found its way into the bottom corner via the hand of Sam Ramsbottom.

One almost became two when Shane Henry headed against the bar following a neat cross from the impressive Hawkins, before the equally exciting Diamond wriggled his way through a sea of bodies to tee up Jamie Chandler who fired wide.

Ryan Hall missed a big chance to effectively end Alfreton’s afternoon when his shot from a tight angle was smothered by Ramsbottom, allowing The Reds to come back into the game in a one-sided second period.

Declan Bacon, who had only just replaced Penikett, saw his effort saved by the alert Gould after the striker was played through one-on-one, but just ten minutes later Billy Heath’s side were level.

After Thomas Platt’s run was halted by the challenge of Stephen Brogan, referee Andrew Kitchen allowed Sinnott the chance to equalise, and it was an offer the striker accepted with an assured spot-kick.

The last laugh almost went to a lacklustre Spennymoor side when Taylor’s superb effort was saved by Ramsbottom, but in the end, the points were shared.

Moors now sit fourth in the league table on 61 points, two points behind third place Brackley Town and with Stockport County now a distant eight points ahead in second. Chorley lead the way on 73 points.

The Moors will hope to get back to winning ways when they host 16th place Hereford this Saturday (30th March) at 3pm and will complete a sequence of four home matches in a row when lowly Guiseley visit the Brewery Field on Tuesday 2nd April at 7.45pm.